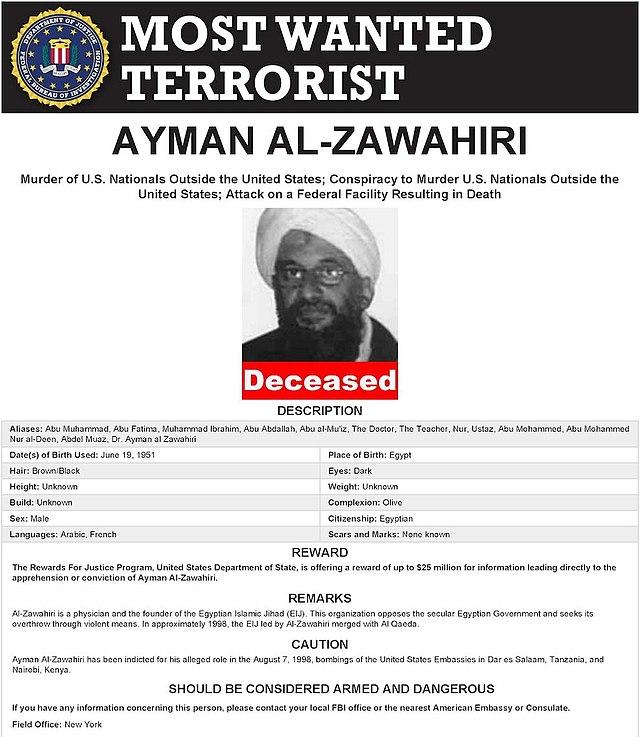 Since the U.S. drone strike on July 30 that killed Al-Qaeda leader Ayman Al-Zawahiri, a number of Western Islamists and their allies have denounced the U.S. government, claiming its operation “threatens peace” and was completely “unjustified.”

Zawahiri was killed in Kabul, where he was reportedly residing with the full knowledge of senior Taliban officials.

Writing in Rai Al-Youm, prominent Western Islamist Abdel Bari Atwan claimed that the strike was nothing more than a “theatrical stunt” designed to “salvage [Biden’s] reputation and presidency after they are miring in the mud of Afghanistan. He’ll surely fail. And a single retaliatory action by an al-Qaida supporter on a US target in Afghanistan or elsewhere could sink his presidency for good.”

The London-based journalist added that the Taliban is now being unfairly blamed, and is not guilty of harboring terrorists.

Atwan is a leading supporter of Palestinian Islamism and once claimed that he would “dance in Trafalgar Square” if Iranian missiles ever hit Israel.

Roshan Salih, editor of British Islamist publication 5 Pillars, covered Atwan’s commentary approvingly in his own outlet, and added on Twitter:

A statement published by the leading British Salafi organization, CAGE, declared that the killing of Zawahiri is a “clear violation of the US-Islamic Emirate of Afghanistan Doha peace deal and brings back to centre stage the US’s unlawful drone programme. This further cements America’s perpetual war doctrine, which is primarily driven by the military industrial complex.”

According to the Wall Street Journal, CAGE’s head, Moazzam Begg, once “admitted that he was a jihadist recruiter, that he attended three al Qaeda terrorist-training camps in Afghanistan, and that he was armed and prepared to fight for the Taliban and al Qaeda against the U.S.”

The drone strike over the weekend in Kabul has shown again that USA is unwilling to abide by its promises. Recent years show scant evidence that 71 yr old #Ayman_al_zawahiri intended to target USA especially in light of Doha. However, instead of showing magnanimity in defeat 2/3 … embittered USA continues to inflict suffering on the people of Afghanistan by freezing their hard earned money and forcing poverty and starvation on the population while claiming to bring “closure” to the never-ending #WaronTerror with another #extrajudicialkilling.”

Over the Atlantic in the United States, the Aafia Foundation claimed that the killing of Zawahiri was “The shame of Americanism. A never-ending commitment to killing…by conventional war, drone strike, or hunger!”

The Aafia Foundation is a registered 501c working to support and fundraise for convicted Al-Qaeda operative Aafia Siddiqui.

Meanwhile, Syed Haq, a New York-based Islamist activist and aspiring journalist, wrote that the killing would serve as a pretext for additional “surveillance on Muslims” by the federal government:

Fellow travelers also chimed in. The Center for Constitution Rights condemned the “extrajudicial killing” of Zawahiri and the “’war on terror’ [that] has brought not a shred of justice, only suffering and destruction.” It may be relevant that one of the Center’s board members is Laila Al-Arian, a prominent Islamist activist and the daughter of convicted terrorist supporter Sami Al-Arian.

For all these examples of fury, however, the silence from other Islamist groups was more noticeable. Groups such as CAIR, which comment regularly on international affairs and U.S. drone strikes, appeared to remain curiously silent about the news of Zawahiri’s killing.

There were a few instances of support expressed for the operation by Islamist-tied individuals. Representative Ilhan Omar, a regular partner of American Islamist organizations, tweeted:

CAGE’s Moazzam Begg, however, seemed particularly unhappy with this statement, responding with:

Zahir Akhtar, a radical activist from a group named Documenting Oppression Against Muslims, echoed similar thoughts – demanding to know when “Bush and Blair” would be “targeted by US drones.”