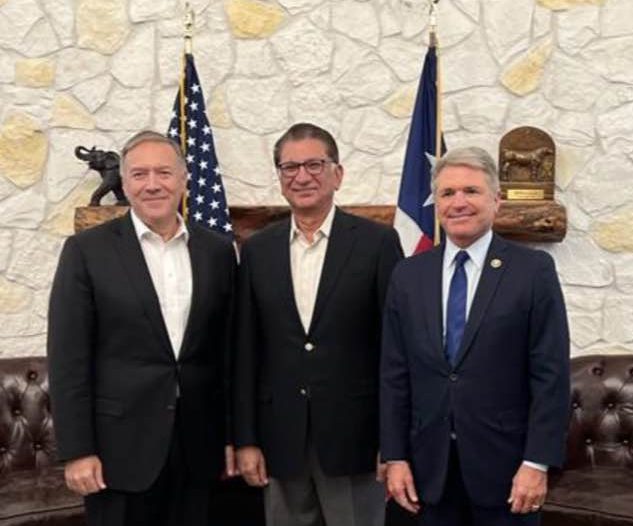 At the end of October, Islamist-supporting officials of the U.S. branch of Pakistan’s political party, Pakistan Tehreek-e-Insaf (PTI), hosted former Secretary of State Mike Pompeo, as well as Republican Congressman Michael McCaul, at an event in Houston, Texas.

PTI-USA and its officials have, over the past year, attempted to convince American Pakistanis of a conspiracy that Imran Khan, PTI leader, was deposed as Prime Minister of Pakistan as part of a regime change effort in which the Biden administration was supposedly complicit.

To advance these conspiratorial claims, PTI activists have worked particularly hard to reach out to the American Right, with leading PTI activists such as Sajjad Burki telling Pompeo that: “We have seen in the last six months such a shift of Pakistani Americans wanting to vote Republican. In the last one month, you’ll be surprised how many people I’ve met who have out openly and said, ‘we’re not voting Democrat, we will vote Republican.’”

Sajjad Burki and PTI-USA serves as an important component of a Houston-based Islamist network. Burki works closely with Islamist activists such as Ghazala Habib, who runs a global network of Islamist and Pakistani operatives in coordination with the Pakistani regime.

Habib served as the official “representative” of the late Kashmiri jihadist leader Syed Ali Shah Geelani and well as Asiya Andrabi, head of Dukhtaran-e-Millat, which, The Economist notes, “supports terrorists” and advocates jihad.

Burki remains vital to the interests of the PTI and elements of the Pakistani regime. On November 3, Burki published photos of his recent meetings with the President of Pakistan, and a ceremony of him receiving the “Presidential Pride of Pakistan Medal of Excellence for Overseas Pakistan.”

By attending events for a foreign political party, it seems clear Pompeo and other Republicans are courting Pakistani American support. Pompeo responded to Burki’s claims of regime change by denouncing the Biden administration’s Pakistan policies, and praising the “professional relationship” he has personally enjoyed with the “head of the ISI, [inaudible] … the best.”

(Western officials have long accused the ISI – Pakistan’s feared and brutal intelligence service – of close links with terrorist groups across the globe).

As discussed in a recent FWI essay, growing Islamist support for the Right is occurring across many Western Muslim communities.