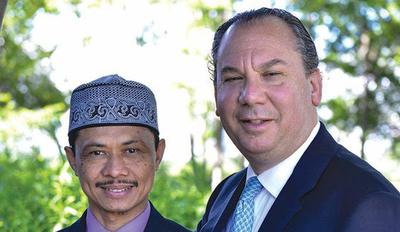 Writing in prominent Indonesian outlets, the New York-based Indonesian cleric Shamsi Ali has denounced criticisms of the Taliban and praised its “victory” in Afghanistan.

Islamist Watch has written about Ali before, noting his curious ability to advodate unpleasant anti-Semitism and support for jihadists while also practicing interfaith work, for which he has been widely praised.

In his August article, translated by Islamist Watch, Ali starts with a potted, specious history of modern Afghanistan. He writes of the “euphoria” among Muslims when the Soviet Union was defeated, noting – without condemnation – that the (anti-Semitic) “slogan ‘Khaebar Khaebar ya Yahuud. Jaesyu Muhammad saofa ya’uud’ was heard everywhere.”

Ali also notes that “as a Pakistani [International Islamic University] student in the late 80’s (88-95), I knew very well the heat of jihad and the spirit of the mujahidin in Afghanistan.”

But tribal warfare in Afghanistan, Ali mourns, corrupted the “blood” that was once “fresh and fragrant and flowing in the earth of jihad.”

Later, Ali tells us, the Taliban “provided Bin Laden and his group protection” despite Bin Laden being supposedly “a figure raised by America itself.”

Now, “with America’s decision to leave Afghanistan, the Taliban are now proving that they exist. Not only exist. But it has power and is in the hearts of most Afghans.”

Ali praises the “advantages and the positive side of Donald Trump. It was he who executed the deal with the Taliban allowing America to leave Afghanistan through the Doha agreement in Qatar.”

Finally, Ali denounces Western media for its criticisms of the Taliban’s barbarism, writing:

The media and many parties do not stop barking, displaying aspects of deficiency, or forcing them to appear as threats. The chaos at Kabul airport, for example, was broadcast over and over as if it represented the face of the country, even though the Taliban troops entered Afghanistan without shedding the blood. Why doesn’t the world open its eyes to this reality?

It is not easy indeed for the Taliban in the future, besides bad narratives developed around it, including mistreatment of women, etc., a narrative has also been built that the Taliban is a “violent group” (a group that loves to commit violence). The built narrative or perception is refuted by the reality of his victory without bloodshed.

Why doesn’t the world give the Taliban and Afghans room to prove that they can manage their own country? That they have their understanding and way of managing it, why should other countries care and fuss about it over?

America and the international community, therefore, must be honest with the democratic values it upholds. Give the Taliban and the Afghan nation the right to work properly at their best. Who knows that under the Taliban government Afghanistan will be better than the puppet government formed so far.

Disagreement with the Taliban over the question of women’s rights, Ali writes, simply “may be because it is merely an expression of resistance to the social tendencies of outsiders (read Western).”

Ultimately, Ali calls on Indonesia to “neutralize the perspective of the Taliban held by those who have different views” and to “emerge as a strong and beautiful bridge between the aspirations of the Taliban and the concerns of the world.”