‘All She Wanted to Do Was Bring Back the Muslim Empire:’ Islamist Hero Worship Turns to Violence

ResearchInvestigations‘All She Wanted to Do Was Bring Back the Muslim Empire:’ Islamist Hero Worship Turns to Violence 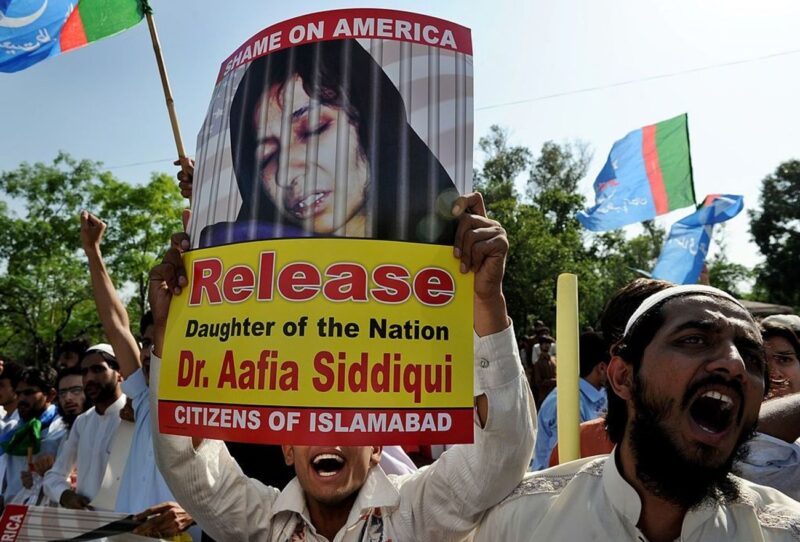 Recalling her sister Aafia Siddiqui’s 2008 arrest by Afghan security forces, Dr. Fowzia Siddiqui was dumbfounded. “How could she get there?” she asked. “I mean, what happened?”

To the members of a 2010 jury that convicted Aafia of trying to murder U.S. soldiers, the answer is likely very simple. Aafia journeyed to Afghanistan to wage jihad against American infidels.

Yet, Fowzia and her Islamist allies from the Coalition for Civil Freedoms, a family support group established to lobby for imprisoned terrorists, reject the jury’s conviction and maintain Aafia’s innocence. After all, they argue, how could a gifted neuroscientist and mother of three young children abandon her family and commit herself so feverishly to holy war?

Even in defending Aafia, her supporters unwittingly reveal the radical world of anti-Semitism and Islamic supremacy from which she emerged.

Aafia’s not-so-modest dream is one shared by jihadist militants around the world, terrorists such as ISIS, Al Qaeda, and the Taliban, which have bartered unsuccessfully for Aafia’s release with the lives of Western hostages. When these efforts failed, a “lone wolf” took hostages at a synagogue in Colleyville, Texas, on January 15, based on the bigoted belief that America’s top Jews would have the power to free Aafia.

Just where would Malik Faisal Akram, the slain Colleyville gunman, get the wild idea that only America’s Jewish leaders could negotiate Aafia’s freedom? Conspiracies surrounding Aafia’s arrest and subsequent trial have become Islamist lore, widely mythologized among extremists who contend the Pakistani native was kidnapped, tortured, and framed by the U.S. national security establishment and its Jewish handlers.

Such conspiracies proliferate among Islamists in the U.S., including powerful lobby groups with influence in Washington. Despite its mission to free convicted Islamic terrorists, CCF receives a sympathetic ear from members of Congress, lawmakers such as Sens. Dick Durbin (D-IL) and Elizabeth Warren (D-MA), who have received CCF lobbyists and listened to their dangerous demands.

By embracing Aafia’s cause and the fantasies associated with it, CCF bears at least a peripheral responsibility for the violence done in her name. CCF’s 2020 webinar, “A Conspiracy and a Cover Up: the Story of Dr. Aafia Siddiqui,” is a case study on how lawful, non-violent Islamists radicalize others to violence.

“A wise man once said those who can make us believe absurdities, can also cause us to commit atrocities,” warned Mauri Saalakhan, head of the Aafia Foundation, a CCF member organization.

What are these “absurdities” that Saalakhan cites to justify violence? Aafia’s followers reject the overwhelming evidence showing that she abandoned her husband and children, married the nephew of 9/11 mastermind Khalid Sheikh Mohammed, and was captured in possession of plans to attack high value targets in the U.S.

Instead, CCF panelists maintain that Aafia was “kidnapped” in Pakistan and moved to a CIA “black site,” where she was tortured for five long years. She never tried to shoot her U.S. Army interrogators, and the bullet she took to her gut in response was entirely unprovoked. Suggesting otherwise, Saalakhan said, is liable to motivate Aafia’s supporters to “commit atrocities.”

Unfortunately, Saalakhan’s dark premonition was realized on January 15, when Akram entered a synagogue located near the Carswell Air Force base where Aafia is serving an 86-year sentence. Rabbi Charlie Cytron-Walker, one of four hostages to survive the ordeal, said Akram “literally thought that Jews control the world.”

“[Akram] thought he could come into a synagogue, and we could get on the phone with the ‘Chief Rabbi of America,’ and he would get what he needed,” Cytron-Walker recalled.

However preposterous Akram’s strategy of turning to Jewish leaders may seem, he was guided by enduring Islamist attitudes concerning Aafia’s case — the belief that Aafia’s homeland and the larger Muslim community have turned their backs on the Pakistani native, and that Jews are capable of incredible feats of power when properly motivated.

Addressing CCF’s online viewers, Saalakhan echoed classic anti-Semitic tropes about Jewish control of government and media. “Aafia’s case is really one that brought them out of the woodwork — and that is the Zionist element,” he said. “The Zionists. They have been … very determined in their manipulation of information around Aafia and using their enormous influence to make things difficult for folks who want to give support to her.”

Saalakhan cited “a friend in Boston” who advised him to “‘sue media establishments’” reporting on Aafia’s crimes. This friend asked him to investigate “‘which Zionist groups were involved in a conspiracy to get rid of Sister Aafia around the time she was quoted in the newspaper saying that, “If everyone knew about the beauty of Islam, they would all want to be Muslim.”At that time, Jewish groups started hurling the Islamo-fascist slur at her,’” the friend claimed.

No wonder Akram’s pleas were aimed at Jewish leaders; if they had the power to mobilize government and media against Aafia, surely they could act as her saviors. But why not ask for the Pakistani government to intervene on Aafia’s behalf? After all, the Islamic Republic awarded $2 million to the Muslim Legal Fund of America, a CCF member, to fund her legal defense (Aafia later tried to fire her lawyers because she thought they were Jewish)

Joining the panel, CCF founder Sami Al-Arian claimed that Pakistan was responsible for abducting Aafia and handing her over to American authorities, basing his theory on the pretense that Pakistani officials were known post-9/11 for accepting government aid from the U.S. and handing over wanted terrorists. Al-Arian may have a bone to pick with U.S. authorities after he was deported to Turkey following his 2006 conviction for providing material support to Palestinian Islamic Jihad, a designated terrorist group.

Fowzia was even less forgiving, accusing the Pakistani government of coveting her sister’s death. She claimed that officials, who have turned to calling Aafia the”‘Daughter of Pakistan,” told her “very clearly: ‘They hope Aafia dies.’”

“When I call them, they say ‘Isn’t she dead yet? We’ll gladly bring back her dead body.’” Fowzia said.

If CCF and other Islamists feel that Pakistan has abandoned Aafia, they feel that same for the general Muslim American community, which each panelist agreed has been too cautious to endorse the “political prisoner.” Their disappointment is evidence that most Muslims reject Islamist narratives associated with Aafia.

Nonetheless, Al-Arian blasted fellow Muslims for not getting involved and pointed to the Jewish example: “Just imagine if this person was a Jewish person, how the Jewish community, and I applaud them for that, would have risen as one person … ” he said

Understanding the myths that drive Islamist activism helps to explain Akram’s desperate actions at Congregation Beth Israel. With nowhere to turn, he, too, embraced half-cocked theories about Jewish world domination and was willing to wager his life based on these bigoted misconceptions.

Aafia’s case continues to be a favorite cause among Islamists the world over. From planning terrorist attacks to lobbying Congress, extremists have adopted dangerous conspiracies involving bigotry and anti-Americanism in pursuit of Aafia’s freedom. In fact, the only Islamist who isn’t pushing these false narratives and advocating for Aafia’s release seems to be Aafia herself. For all of the violence and activism done in her name, she stopped contacting her family long ago and refuses visits from politicians and outside attorneys.

Yet, with Aafia’s silence, the Islamist hysteria and conspiracy mongering only continues to grow. Akram’s ruthless assault wasn’t the first, and it won’t be the last.

Benjamin Baird is deputy director of Islamist Watch, a project of the Middle East Forum.