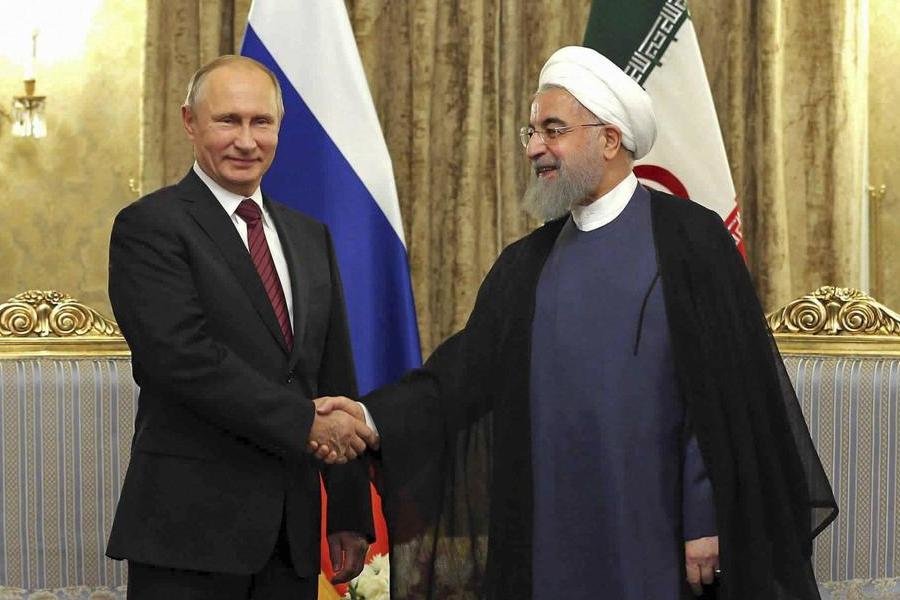 For the most part, the question of Ukraine appears a thoroughly non-Muslim conflict, and thus not an Islamist issue either.

But there are some, however, who suggest otherwise. Since 2014, for instance, observers have repeatedly raised (somewhat questionably) the possibility of an Islamist insurrection in Crimea, given the sizeable Muslim population.

The Russian government undoubtedly does not mind such musings. The Crimea was a key center of conflict between the Tsarists and the Ottoman Caliphate. And indeed, often invoking Tsarist ideas about Russia’s grand civilizational ambitions and the importance of Crimea to Russian Orthodox thinking, Putin has frequently cited the historical threat of the Ottomans in his justifications of Russian aggression. In fact, he even mentioned the Ottomans during his infamous speech on February 21, justifying his decision to recognize the two breakaway regions in Eastern Ukraine.

Reportedly, Putin has also baselessly claimed as part of his justifications that Crimean Tatars are “radical Islamic terrorists” working to threaten Russians.

Across the globe, because of Soviet actions in Afghanistan and post-Cold War conflict in Chechnya and Syria, there are few in the Islamist world who do not have some sort of opinion on Russia. But while many Islamists remember Russia’s brutality against Muslims, some are notwithstanding increasingly willing to consider Putin an ally.

In recent weeks, as a prelude to an upcoming visit to Moscow, Pakistani regime leader Imran Khan – who has worked particularly hard to manipulate Western Islamist sentiment in recent years – praised Putin’s attack on blasphemy against Islam in Western countries, and declared: “He is the first Western leader to show empathy & sensitivity to Muslim sentiment for their beloved Holy Prophet (PBUH).”

There is also increased international Islamic awareness and even some appreciation of Russia’s evolved policies on both Islam and Islamism. Today, at least 10% of Russians are Muslim, and the nation boasts the largest Muslim population in Europe. In recent years, across many of its republics, Moscow has increasingly worked to co-opt Islam rather than suppress it in all its forms. The most prominent example is Ramzan Kadyrov, the Islamist strongman leader of Chechnya, as well as a faithful puppet of Moscow and its leading emissary to Muslim leaders around the world.

And then there are the Shias. Following years of collaboration in defense of the Assad regime in Syria, along with close public ties on the world stage, the Iranian regime owes Moscow a great deal, and it appears that its proxies and apologists in the West have followed through.

While the traditional religious representatives of Shia Islamism in the West have not said much; organizations accused of serving Tehran’s interest politically in D.C. have been rather active. One particularly noticeable example has been the Quincy Institute for Responsible Statecraft, which was founded by officials of the National Iranian American Council (NIAC).

The Quincy Institute has produced a steady flow of articles and research that directly serve Moscow’s rhetoric over Ukraine, such as a February 11 piece published by the organization, ostensibly exposing Ukrainian lobbying efforts as a sinister interference in American politics, and baselessly implying the cause of America’s “militarized approach” towards Russia is Ukraine’s attempts to sabotage Russia’s Nord Stream 2 project.

Similarly on February 10, Quincy Institute’s “senior research fellow,” Anatol Lieven, published an article in Foreign Policy claiming that NATO and the EU are working to “expel Russia from Europe” through “eastward expansion,” and urging the West instead to partner with Putin’s puppet NATO rival, the Collective Security Treaty Organization. Commentators at Foreign Policy noticed the agenda, with one pronouncing the piece to be nothing more than “apologia for the thug in Moscow.”

The Quincy Institute is a curious organization, pushing Tehran-friendly talking points while taking both far-Left and even libertarian funding, and also employing semi-respectable academics and former senior diplomats. It is, as Tablet’s Armin Rosen wrote in a profile of the group and its attempts to become the new Iran lobby, Washington’s “Weirdest Think Tank.”

The Quincy Institute’s carefully-diverse array of ideological partners has given it credibility – allowing it to publish in places that more overt proxies of the Iranian regime would not.

Back in June 2021, Quincy officials were already agitating against NATO in major media, with the organization’s “director of grand strategy,” Stephen Wertheim, writing in the New York Times that Biden administration must admit that “NATO expansion has come to an overdue end” or risk “war with Russia.”

Quincy head and NIAC founder, Trita Parsi, meanwhile, has been busy using the Quincy Institute to oppose possible sanctions against Russia. In fact, a considerable number of Parsi’s recent Twitter posts feel to be nakedly in Moscow’s interests.

Parsi, commentator Hussein Ibish writes, is an “ideologue … pushing a very focused agenda … representing a perspective of a certain wing of the Iranian government.”

Meanwhile, NIAC’s “action” arm seems to have been busy pushing Iranian-Russian relations and noting the Tehran regime’s criticisms of NATO. In recent days, NIAC’s “senior research fellow” has posted on Twitter to complain that “Blinken obsessively tweets about the threat of Russia” all while the “US is still actively starving millions of people in #Afghanistan, punishing innocent Afghans because we lost a 20-year war.”

It is not just the apologists for Tehran who employ such rhetoric. One mouthpiece of the Sunni Islamist Qatari regime has responded approvingly to such comments. Sarah Leah Whitson, executive director of Doha’s D.C. proxy, DAWN, appeared to endorse the NIAC official’s comments, adding that U.S. denunciations of Ukraine are nothing but “crocodile tears.”

Whitson, of course, is not an Islamist herself, but a fellow traveler – as are many of the staff and officials of the Iranian regime’s political lobbying outfits. Islamists across the board seem, somewhat, to be outsourcing their outrage. Meanwhile, direct commentary from Islamist religious voices on the subject of Ukraine remains, so far, relatively rare. Although this may be changing.

In some ways, the lack of comment so far is surprising, given the hatred so many Sunni Islamists once harbored for Russia, and the sizeable Muslim populations found in both Ukraine and Russian territory. Some Sunni Islamists have noticed the silence and are seeking to stoke Muslim anger: the hardline radical outlet Muslim Skeptic warns that Ukraine has a considerable Muslim population, and war with Ukraine would produce a considerable “effect on the Ummah.”

But where commentary is so far found within Western Sunni Islamist circles, it is mixed.

Some, including proxies for the Turkish regime in the United States such as the Turkish Heritage Organization, appear committed to NATO’s position, in line with recent statements by the Erdoğan government. Other regime fronts, such as the SETA Foundation, also advance anti-Moscow ideas, albeit a little more carefully.

In Los Angeles, the leader of the local branch of the Council on American-Islamic Relations (CAIR), Hussam Ayloush, has taken a more expected anti-Putin route, although this may be due to his rather close ties to the Turkish regime. Writing on Facebook, Ayloush praised Turkey for purportedly standing up to Putin, and described “bloody Putin” and Russia’s violence in Syria as having been a a “test invasion” and that he would “stand in solidarity with the people of Ukraine. … Putin is a global threat, bully, and war criminal. Appeasement did not work with Germany in the 1930s and will not work today with Russia.”

Ayloush may be somewhat of an exception. For the most part, Sunni Islamists linked to Muslim Brotherhood-founded groups such as CAIR have so far contributed little. The silence from CAIR is particularly interesting, given that it usually manages to find an angle to comment on pretty much every world event.

In stark contrast, many traditional Salafi-jihadists remember Russia’s crimes too well to ever consider a pro-Moscow position. According to MEMRI, some Salafi jihadists, such as a “a pro-Al-Qaeda cleric who is based in Canada,” have “called on the people of Syria to wage jihad against Russia and to take advantage of its current preoccupation with its conflict with ‘the Crusader West.’”

Still, some are more circumspect. Lawful, pro-jihadist organizations such as CAGE are working to condemn Putin and the West equally, promoting conspiratorial articles claiming that the “UK ignored Chechnya war crimes to push BP’s oil interests as it worked to get Vladimir Putin elected in 2000.” CAGE’s head, the former Guantanamo Bay inmate Moazzam Begg, along with many other jihadists within CAGE’s network, once sought to fight the Russians in Chechnya.

A Cautious Embrace of Putin?

Perhaps as a sign that Russia’s behavior in Chechnya and Syria no longer radicalizes Sunni Islamists in the way it once did, some radicals, however, seem to be exploring the idea of adopting a pro-Putin (or, at least, an anti-Western) position.

For example, the American branch of Hizb ut-Tahrir (HT) has attacked the Biden administration’s “narrative” on Russia and Ukraine as “lies.” HT is a global Islamist movement, banned in many countries, that openly advocates for a theocracy. Curiously, in Russia, HT is the leading target of the regime’s anti-jihadist crackdowns.

Meanwhile, hardline online activists, such as the editor of the popular British Islamist publication 5Pillars, have denounced Western media coverage over Ukraine as “alarmist.” Other prominent Islamist commentors also take this different tack – with Salafi converts denouncing the Biden administration’s claims as “warmongering” or Jamaat-e-Islami supporters giving a platform to left-leaning anti-war speakers.

In a video to discuss the potential conflict in Ukraine, Faisal Ahmad, a violently anti-Jewish American imam, recently praised Putin’s efforts to bring Iranian and Turkish leaders together and expressed his admiration for Russia’s anti-homosexuality measures. In a post on Facebook, Ahmad writes: “[Ukrainian President] Zelensky is attempting to subjugate Russia to zionist power, however the Russian people, who are orthodox Christian are resisting. Russia refuses to be a client state of Israel.”

This cautiousness seems unlikely to last. Given, just in the last few months, Turkey’s growing support for Kiev, a fast-growing Russian-China-Iranian axis, Moscow’s outreach to Islamabad, anticipated tensions in the Middle East, and an ever-duplicitous Qatar, international Islamist networks will be inevitably be drawn into the global consequences of the conflict, whether they want to be or not.

Sam Westrop is director of Islamist Watch, a project of the Middle East Forum