Hassan Shibly, the former head of Florida chapter of the Council on American-Islamic Relations (CAIR), has cheered on terrorist organizations responsible for the deaths of U.S. soldiers. 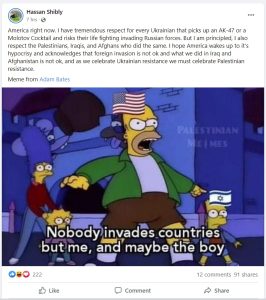 In a Facebook post authored on March 16, 2022, Shibly wrote that he has “tremendous respect for every Ukrainian that picks up an AK-47 or a Molotov Cocktail and risks their life fighting invading Russian forces. But I am principled, I also respect the Palestinians, Iraqis, and Afghans who did the same.”

With this post, Shibly appears to cheer on terror organizations that have killed thousands of family members of his neighbors in the U.S. in battle over the past two decades.

He also seems to legitimize undeniably bad actors, such as the Taliban, Al Qaeda in Iraq, and Hamas by comparing them to the efforts of the Ukrainian government and its president, Volodymyr Zelenskyy, to defend its citizens from an invading army that attacked without provocation.

It’s not a good look for an activist who is intent on shaping the opinion of his fellow Americans, but then again, Shibly has posted similar statements in the past.

For example,  October 21, 2021, he called on American Muslims to work for the release of Aafia Siddiqui who in 2010, was convicted for the  attempted murder and assault of U.S. troops in Afghanistan. He has also said hateful things about homosexuals.

In April 2021, National Public Radio reported on numerous accusations of sexual harassment that preceded his resignation as executive director of CAIR’s Florida chapter.

CAIR Leader in Minnesota Stomps on a Landmine at Hamline University