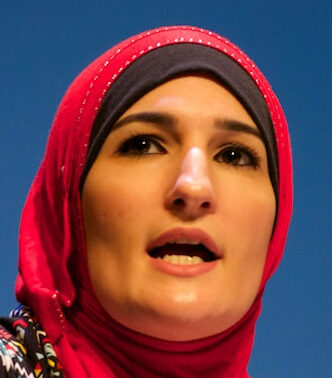 Linda Sarsour, an activist who promotes a mixture of progressivism and Islamism, is responding angrily to the cancelation of a corporate diversity event where she was scheduled to speak.

“You would think racists would ease off during the blessed month of Ramadan, but [I] guess not,” she wrote on Friday after GEICO, the insurance company that scheduled the event, announced its cancelation.

Sarsour further accused GEICO of capitulating to “outside forces” and condemned the company for portraying her “work to defend marginalized communities including Arab, Muslims and Palestinians [as] ‘hatred.’”

Asra Nomani, a Muslim women’s rights activist, cheered GEICO’s decision to cancel the event. “Linda Sarsour is proud of her hate of Israel, Israeli Jews and Muslim reformers and atheists, not to mention conservatives, cops and the US military,” she wrote.

GEICO canceled the event, slated to take place as part of its diversity and inclusion program, after online activists from StopAntisemitism.org posted a screenshot of a company email promoting the event on Twitter on Wednesday, April 6, 2022.

StopAntisemitism.org declared that it was “horrified that a respectable company like @GEICO would choose to feature antisemitic bigot [Linda Sarsour] to represent the MENA region.” Later that day, other organizations such as the Anti-Defamation League and StandWithUS weighed in with similar messages.

In response to the outcry, GEICO cancelled the event and apologized for inviting Sarsour to participate in the first place.

“We apologize to our employees, customers, and others for our initial plan to invite Linda Sarsour to speak at our internal event celebrating Middle Eastern and North African Heritage Month. On Tuesday, we quickly canceled the event,” GEICO reported on Thursday, April 7, 2022. “GEICO does not condone hatred of any kind, and we do not stand for or with anyone who does. We are not aligned with any form of exclusion.”

The Council on American Islamic Relations (CAIR) expressed outrage over GEICO’s decision in a letter to the company’s CEO, Todd Combs. The letter, which was signed by a number of Islamist organizations, calls on GEICO “to immediately delete the statement it published attacking Ms. Sarsour, apologize to the Arab American community for cancelling your planned heritage month event, and meet with us and other community leaders to plot a positive way forward.”

“Your attack on Ms. Sarsour has validated dishonest Islamophobic smears, harmed her reputation and increased the danger she faces,” the letter states.

Zuhdi Jasser, founder and president of American Islamic Forum for Democracy (AIFD) and co-founder of the Muslim Reform Movement said, “I am certainly not a fan of ‘cancel culture,’ but there’s a limit to what corporations can promote. “Sarsour regularly traffics in grotesque antisemitism and is a leading supporter of the BDS movement which is essentially dedicated to the economic destruction of the state of Israel. Her radicalism was even too toxic for the Women’s March which booted her as co-chair.”

“Sarsour has disqualified herself for speaking on behalf of Arab and Muslim is in the U.S. who are predominantly non-Islamist with her antisemitism, conspiracy theories, jihadization, and extreme faux-progressivism,” Jasser said.

Not the First Time

This is at least the fourth time Sarsour, former executive director of the Arab American Association of New York (AAANY), has been sidelined since 2019 when she was forced to resign, along with two other activists, Bob Bland and Tamika Mallory, from the board of the Women’s March because of their ties to Nation of Islam Leader Louis Farrakhan, who spoke of “satanic Jews” at an event in 2018.

In early March 2020, ViacomCBS canceled a Women’s History Month event where she was scheduled to appear.

Joseph Biden’s presidential campaign distanced itself from Sarsour after she appeared in an online event organized by the Democratic National Committee Muslims and Allies in August 2020.

Sarsour presents herself as a beacon for diversity and women’s rights but has made a number of troubling comments over the years. In 2011, Sarsour declared that two counter-Islamist activists, Brigette Gabriel and Ayaan Hirsi Ali, were “asking for an a$$ whippin’” and that she wished that she could take their vaginas away because they “don’t deserve to be women.”

When queried on this statement at an event organized by an Asian American activist at Dartmouth University in 2017, she invoked the skin color and gender of her questioner to evade the challenge.

“So, let’s give some context here,” she said. “This is an event organized by an Asian American, right? [….] Talking about communities of color impacted at this moment and I have a young white man who is not directly impacted by any of the issues that I mentioned.”

Sarsour has promoted the application of Islamic law in the United States.

In 2017, Sarsour was accused of silencing accusations of sexual abuse by a woman who worked for Sarsour’s office at AAANY in Brooklyn. The accuser, Asmi Fathelbab, declared that Sarsour “oversaw an environment unsafe and abusive to women,” and that “Women who put [Sarsour] on a pedestal for women’s rights and empowerment deserve to know how she really treats us.”

According to the New York Post, Fathelbab stated that Sarsour called her a liar, suggested she was too overweight to be targeted for sexual abuse and threatened to have her blacklisted from New York political and activist circles.

“She told me I’d never work in NYC ever again for as long as she lived,” Fathelbab told the New York Post.

Neither GEICO nor Mpower Change, Sarsour’s current employer, responded to inquiries about the cancelation.

Islamists Do Not speak for British Muslims