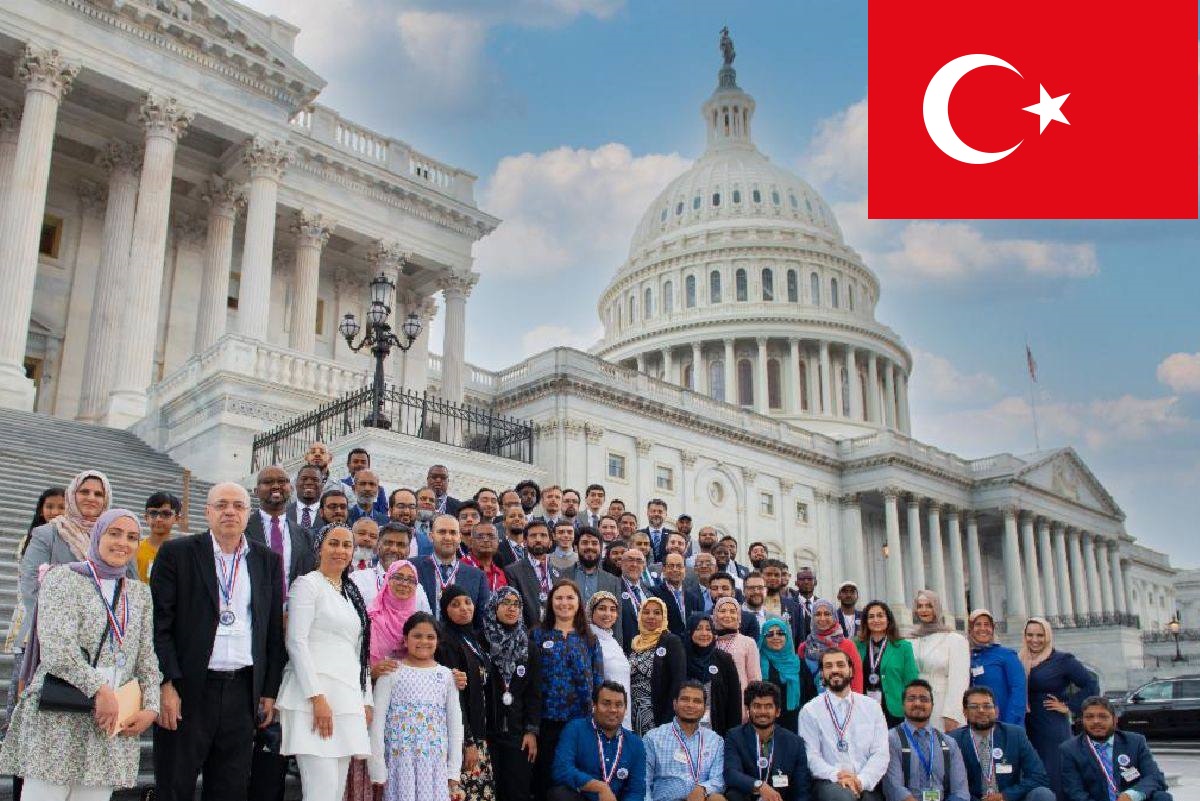 A Turkish-backed coalition of the nation’s most prominent Sunni Islamist organizations converged on Capitol Hill for the 7th annual National Muslim Advocacy Day in mid-June. The U.S. Council of Muslim Organizations (USCMO) enjoyed logistical support from the Turkish government as more than 300 delegates toured Congressional offices to lobby a package of radical legislative proposals.

Since its inaugural Muslim lobby day in 2015, USCMO regularly hails itself as the uncontested representative of a Muslim American voting bloc — one that is united by concerns that affect “all Americans.” However, just three days after this year’s event, which took place on June 13-14, USCMO Secretary-General Ousama Jammal struck a decidedly different tone, describing his experience at the lobby day in a fiery Friday sermon at the Mosque Foundation in Bridgeview, Illinois.

“This is our battle. This is our jihad, our weapon is our vote,” Jammal said. “This is what we are going to fight with.”

Thanks to the coronavirus, three years have passed since the last National Muslim Advocacy Day was held in-person, with face-to-face legislative meetings. Similar events, or “Hill days,” are a regular occurrence in the nation’s capital among special interest groups, although no other constituency comes with as much extremist baggage as America’s largest Islamist coalition.

Founded in 2014, USCMO is an umbrella organization consisting of various American Islamist groups tied to foreign extremist movements. Members such as the Council on American-Islamic Relations and American Muslims for Palestine have been connected to Hamas in U.S. courts, while prosecutors have identified the Muslim American Society as the “overt arm of the Muslim Brotherhood in America.”

Other members, such as the Islamic Circle of North America and the Muslim Ummah of North America, are widely considered offshoots of Jamaat-e-Islami, a militant South Asian Islamist movement accused of genocide in Bangladesh. The coalition even includes the Ministry of Imam W. Deen Mohammad, a normative Sunni Islamic sect descended from the black nationalist Nation of Islam movement.

However, USCMO is not merely a diverse cross-section of global Islamist factions. The umbrella group exists as a bridge between Turkey’s ruling Justice and Development Party and America’s Muslim community.

Within Islamist circles, Turkish President Recep Tayyip Erdoğan is increasingly regarded as the unofficial leader of the Islamic world. He has used Islamist institutions in the U.S. to burnish that image. USCMO and its member organizations have rallied for Turkish causes, denounced Erdoğan’s enemies, and even urged Muslim Americans to buy Turkish products and take flights to Turkey aboard the state-owned Turkish Airlines.

In return, Erdoğan has thrown his weight behind his Islamist supporters. Addressing a USCMO member organization in November 2020, the Turkish president pledged to “give any kind of support to any initiative and project undertaken by the Muslim American community” to elect Muslim lawmakers or “make them more visible in Congress and American politics.”

This year, Turkey helped underwrite Muslim Advocacy Day by offering participants free room and board at the Diyanet Center of America, a 60,000 square foot mosque and Turkish cultural center located just miles from the Beltway. Erdoğan has urged USCMO members to make use of the sprawling government-owned complex, which is outfitted with a Turkish bath house and luxurious guest rooms that compete with the finest D.C. resorts.

“People say, ‘Why we are [sic] connected to Turkey?’ I think there’s an answer for that,” Jammal said after his latest personal audience with the Turkish president in May, pointing to his organization’s unrestricted use of the $110 million facility.

Splitting into state delegations – some of which appeared to further segregate by gender – USCMO’s volunteer lobbyists reportedly visited 200 Congressional offices, where they pitched a series of radical legislative and policy initiatives. These proposals, which have failed to attract much support from Congress, look to provide unique protections to Islamists, punish their political enemies, and preserve their radical ideology.

For instance, one of the “asks” at this year’s lobby day dealt with cancelling student loan debt, a key plank of the progressive wing of the Democratic Party. But it didn’t stop there. USCMO proposed “interest-free” lending to students in accordance with Islamic laws against “usury.”

“Islam, Christianity, Judaism, and other religions prohibit usury as a destructive and immoral practice,” participants were instructed to tell lawmakers, although the latter two faiths updated their theology centuries ago to permit modern financial lending.

Islam alone rejects interest-based loans, although it isn’t clear how many Muslims — one of the most educated religious groups in America — refuse federal or private student aid on spiritual grounds.

“We call these “principled loans,” said Robert McCaw, the steering committee chairman for Muslim Advocacy Day — as in, Islamically-principled. McCaw claimed that the generous federal program would be funded by an administrative fee and “the goodwill of the American government.”

In other words, tax-payers will front the bill for USCMO’s costly proposal, and students will still be required to pay beyond the principle for their loans — only these payments have been renamed from “interest” to “administrative fees.” Such practices are common among Islamic banking institutions, which use wordplay to assess synthetic forms of interest.

USCMO’s second policy initiative would create an “Islamophobia envoy” to monitor anti-Muslim abuses in foreign countries, along the lines of a similar office to combat anti-Semitism. A House bill establishing the envoy passed along strictly partisan lines in December, with Republicans complaining the legislation was “rushed,” “duplicative,” and “could be used to label almost any criticism of Islam … as Islamophobic.”

USCMO began pushing for an “Islamophobia envoy” in January 2021, but when efforts to convince the State Department to comply fell flat, Minnesota Rep. Ilhan Omar (D) took up the cause, first lobbying the Biden administration and, when that failed, introducing the Combating International Islamophobia Act.

From the start, this legislation has been less about fighting global human rights abusers, and more about settling scores with anti-Islamist governments. In a letter to Secretary of State Anthony Blinken calling for the “Islamophobia” watchdog, USCMO listed France and India as countries of concern alongside genocidal regimes in China and Myanmar.

Although House lawmakers rejected an amendment to Omar’s bill that would require the envoy to police “intra-communal,” or Muslim-on-Muslim violence, USCMO surprisingly lobbied the Senate during its advocacy day to include a provision to cover “anti-Muslim discrimination in Muslim-majority countries targeting minority Muslim sects.”

There is no doubt that sectarian warfare is gripping the Islamic world, and that Muslims suffer the worst abuses in Muslim-majority countries. However, USCMO is not likely to hold Turkey accountable for the mass displacement of Kurds, or Pakistan for enforcing apostasy laws against minority Ahmadiyyah Muslims.

Instead, the Islamist coalition would no doubt pressure an Islamophobia czar to punish countries such as Egypt, the United Arab Emirates, and Saudi Arabia, where the Muslim Brotherhood and other extremists have been outlawed.

Also at Muslim Advocscy Day, activists pressured Congress to provide a pathway to citizenship for 76,000 Afghan nationals through the Afghan Adjustment Act, despite persistent national security concerns over improper or incomplete vetting of evacuees following the disastrous withdrawal of U.S. troops from Afghanistan.

“When you are good voters, strong voters, you can demand that Congress put money for those whom they have caused to be refugees and those whom they caused to flee their own countries,” Jammal said following the lobby event. He blamed the refugee crisis entirely on America’s “false and faulty foreign policy … all over the Muslim world,” while completely ignoring the role of the Taliban’s oppressive ideology in displacing thousands of Afghans.

Even highly vetted Afghans created an enormous security risk to U.S. troops in Afghanistan, where “insider attacks” from allied Afghan security forces accounted for more than 150 coalition deaths. Yet, USCMO would see that “every Afghan evacuee who sets foot on American soil has a pathway to permanent residency and citizenship.”

Despite the Turkish amenities, as well as support from Islamist-friendly lawmakers such as Democratic Reps. Judy Chu (CA), Ilhan Omar(MN) , and Rashida Tlaib (MI), USCMO’s legislative and policy initiatives were effectively dead-on-arrival. So far, the coalition’s legislative portfolio has failed to win over a single Republican sponsor, and each pending piece of legislation has only attracted a handful of progressive supporters.

During previous on Muslim Advocacy Days, legislators and their aides have rejected offers to meet with USCMO delegates and have refused photographs with them. Attendees have complained that they often met with low-level staffers specializing in national security issues or the Middle East, rather than with their elected officials.

Although pictures from this year’s event suggest another dismal showing from Congress members, it is no longer enough to simply avoid USCMO and its activists. Congress must start treating Islamism like any other extremist ideology by completely shunning its adherents. Furthermore, the Department of Justice must investigate

As long as USCMO presents itself as the monolithic representative of Muslim voters, and as long as elected officials lend credence to that designation, Muslim Americans who don’t share such extreme views will remain politically voiceless, and Turkey’s Islamist government will continue to keep a private army of lobbyists at its disposal.

Benjamin Baird is the Director of Islamism in Politics, a project of the Middle East Forum.