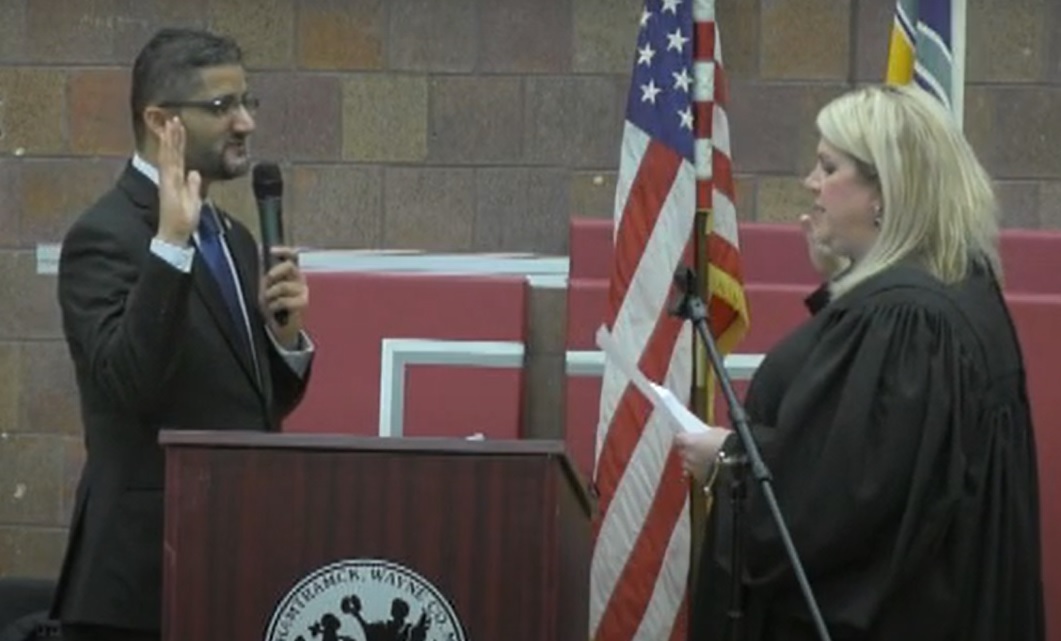 Amer Ghalib, the mayor of Hamtramck, Michigan, apparently believed he dodged a public relations disaster after Harvard University invited him to lecture students about voting rights at a July 31 “Summer Voting Bootcamp.”

“What doesn’t kill you makes you stronger,” Ghalib wrote on Facebook a week earlier. Sharing his invitation to the event, the mayor was boasting that his reputation appeared to remain intact despite a recent article tying him to racist and anti-Semitic social media posts, including one entry where he admitted to multiple incidents of possible election fraud.

In fact, what doesn’t kill you could get you booted from a Harvard University panel. Following an online campaign opposing his participation in the voting seminar, the mayor was replaced with another guest speaker.

“When presented with the facts, it appears that #Harvard made the right call,” tweeted Islamist Watch, a project of the Middle East Forum, which led efforts to protest Ghalib’s invitation. “An apparent election cheat will not be lecturing students about voting rights.”

At least for a few days, it looked like the 42-year-old healthcare worker, who was elected as the first Muslim mayor in Hamtramck’s 100-year history, would not only get away with potentially breaking Michigan election laws; he would be honored as an expert panelist on voting rights and civic engagement by an elite Ivy League institution.

“After the incoming racist attack from outside of our city which I was personally subjected to, from websites that incite hatred towards Islam and Muslims, I received an invitation from Harvard University to deliver a lecture and speak at a seminar about the electoral and political affairs!” Ghalib wrote, sharing what appeared to be a screenshot of the invitation.

The “racist attack” was an article detailing the mayor’s misdeeds, an investigative report from the Middle East Forum that documented Ghalib’s anti-black racism and anti-Semitism in precise detail. It included screenshots and original links (since deleted) to the mayor’s own Facebook page, as well as independent, third-party English translations of Ghalib’s posts written in Yemeni Arabic.

In one of these posts, dated March 8, 2020, Ghalib bragged about persuading absentee voters to change their votes, while also claiming that he completed ballots for their families.

“I did my duty and voted early for [Bernie] Sanders,“ he explained. “There were twenty people around me planning to vote for [Joe] Biden because they loved Obama (since Biden was Obama’s VP). I got them to vote for Sanders and did their families’ ballot cards myself,” Ghalib wrote, sarcastically offering prayers “for the Jewish guy.”

Michigan election laws forbid influencing a voter who is filling out a ballot card, and it is illegal for someone “assisting an absent voter in marking the ballot to suggest or in any manner attempt to influence the absent voter on how he or she should vote.” The FBI’s field office in Detroit and the Michigan Secretary of State’s office responded to official complaints about Ghalib’s post and requested documentation corroborating MEF’s research.

Harvard Votes Challenge (HVC), a student-led initiative that seeks to increase voter registration and civic engagement on Harvard’s campus, was most likely unaware of Ghalib’s Facebook history when it invited him to its Voting Bootcamp. Local and national media outlets went out of their way to avoid discussing the story, and civil rights groups are often leery of election fraud claims — even when they concern serial bigots.

Still, repeated attempts to email HVC student leaders and talk about Ghalib in private were ignored for several days. Harvard officials only responded after details of the controversy were posted on Twitter.

Published by Islamist Watch, the thread quoted Ghalib’s admission of possible voter fraud and called him an “unrepentant racist” for sharing an offensive anti-black meme and “liking” a comment that referred to African Americans as “animal” and “inhuman.”

Harvard officials seemed more irritated than relieved at the prospect of canceling Ghalib’s attendance. When pressed about the matter, Lauren Miller, Director of Communications at Harvard Kennedy School’s Institute of Politics, only offered that, “Mayor Ghalib will not be attending an event with Harvard Votes Challenge,” without providing additional details.

Ultimately, Harvard replaced Ghalib with a more qualified representative of Detroit-area Muslims. Dearborn Heights Mayor Bill Bazzi is a Lebanese immigrant who joined the U.S. Marines straight out of high school and later worked for the Ford Motor Company. Mayor Bazzi should have been Harvard’s first choice to speak on behalf of immigrants and Muslim Americans — not an unapologetic bigot and alleged election cheat who comes from a system of corrupt electoral politics.

Editor’s note: More than a month after publishing this article, Mayor Ghalib responded on his personal Facebook account by claiming that he was not disinvited to Harvard’s event, and willingly declined to attend the event one day after his invitation, due to “a family commitment.”

Mr. Ghalib provided a picture of what appears to be his email response to Harvard Votes Challenge, dated July 19, 2022, which reads: “Thanks for the invitation but it seems it’s not possible to make it on that specific day and time. I do apologize. Maybe in a future event we can work together.”

A picture of the mayor standing alone at the Hamtramck Diversity Festival on July 31, the day of Harvard’s Voting Bootcamp, is available on the City of Hamtramck Facebook page. Described by the local Hamtramck Review as a “who’s who of local politicians and candidates running for office in Tuesday’s primary election, the festival was attended by Mr. Ghalib’s close friend and state Rep. Abraham Aiyash, whom Ghalib urged his Facebook followers to vote for later that same day.

Mr. Ghalib did not explain why he would later boast about his invitation to an event he never planned to attend, only writing that the “coalition of evil … fell for the trap.” Harvard University has not responded to repeated emails inquiring about why the mayor was replaced.

Benjamin Baird is the director of Islamism in Politics, a project of the Middle East Forum.